So this is slightly old news now, but seeing as I've finally got over the jet lag and on top of my inbox, I'm just about in a position to tell you about the Human-Computer Interaction International conference I went to last week.
HCII is a series of conferences which has assimilated nine other conference series over the years. I started going to Don Harris' 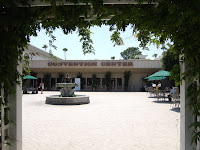 Engineering Psychology & Cognitive Ergonomics conferences from
the first one in 1996, and then at the 4th conference these came under the HCII umbrella. Interestingly, this year saw the first appearance of a conference track on human-centred design (though they insisted on using the US English spelling, with an extra 'e' in 'centered').
I was privileged to chair a session on each of the EP&CE and HCD tracks, also presenting on our Foot-LITE project in the EP&CE session. Both were interesting sessions with a varied set of topics; the EP&CE session focusing on transport automation, with examples from rail, road (two wheels and four!) and air, while the HCD session covered applications from mobile phones to web design.
The rest of the conference was packed with interesting papers and posters - indeed, the biggest problem with this series is that with 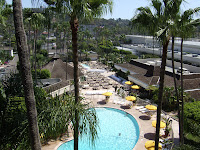 so many tracks, it's hard to decide what you want to go to (let alone keeping on top of the timetable). And it was in a great location - the Town & Country resort in San Diego. The hotel is a little removed from the downtown centre, but next door to a couple of big shopping malls - which offered good eating and drinking options. San Diego is just lovely, a perfect climate and a really good feel to the town.
Curiously, I quite often bumped into the odd superhero around the hotel. I did ponder for a while what interest the Watchmen might have in HCI, but then I realised there was also a big comic conference in town at the same time...
Posted by Mark Young at 22:51