Ghosts of transport yet to come

I had the privilege this week of presenting at the Parliamentary Advisory Council for Transport Safety's (PACTS) conference on 'Beyond 2010: the challenges ahead'. This was largely centred around the proposed road safety strategy for the future (which I've commented on before) and had a very much 'what are we going to do about it' feel. Interestingly, the opening sessions were largely focused on the environmental aspects of driving and promotion of eco-driving, as opposed to safe driving. I found this surprising given the context, but perhaps represents a shift in emphasis for transport policy. Naturally I was banging the drum for human-centred design and how it can solve all our problems for safe and eco-driving in the future. Simple as that.

One of the most memorable presentations from the day was the last one (probably a recency effect...) from ACPO's Mick Giannasi, talking in part about Gwent Police's recent campaign on texting and driving. The 'Cow' video has made it around the world already and has had some ten million hits apparently, even though it was only supposed to be a local thing and was done on a budget of about £10k. (Excerpts are on YouTube - link above - though you have to log in as it's deemed to be graphic material.) This is just amazing impact from both road safety and public engagement perspectives. Mick also showed evidence of how it's already working locally, with its first screening at an event for young drivers in South Wales - cameras were trained on the crowd to record reactions, and interviews afterwards showed the effect it had on those present. It really is hard-hitting.

After the PACTS conference I went straight to Imperial College for the Lloyd's Register Educational Trust's Annual Lecture in Transport Risk Management. Gretchen Burrett, Director of Safety at National Air Traffic Services (NATS), talked about human factors in aviation and air traffic control. She gave a really splendid exposition of the benefits of human factors in safety-critical systems. One of the stand-out points for me was how they're actually recording positive changes in behaviour as markers of effectiveness for HF in the cost-benefit analysis - that's as opposed to just monitoring reductions in errors or accidents. I was really impressed with this approach - I've long thought that one of our biggest barriers in uptake of HF is persuading people of the benefits. Since nobody notices the absence of accidents, people like Gretchen are otherwise the unsung heroes of safety. Measuring positive changes that people will actually notice is a great way for HF to hammer home its message.
Posted by Mark Young at 17:14 No comments: 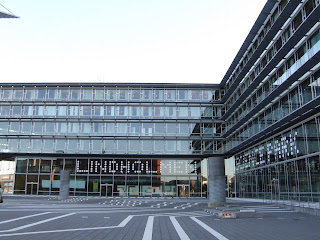 Last week I attended the First International Conference on Driver Distraction and Inattention, held at Lindholmen Science Park in Gothenburg. The site is next door to Chalmers University, which itself has good links with Volvo research – so it was an excellent choice of venue, and as you can see from the pictures, a very pleasant setting to boot. 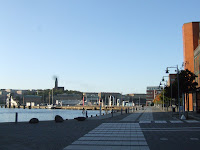 The conference itself was top notch too, with some high profile speakers and delegates, and a programme jam-packed with interesting papers for people of our ilk. In fact, there were often too many to choose from, with three parallel sessions meaning I missed a lot of stuff I wanted to see – and the proceedings aren’t going to be out for a few months either. But I’d rather have too much choice than too little – sign of a good conference for me.

We were well represented for the HCDI at Brunel – Stewart Birrell presented a paper on our Foot-LITE project, while I got involved with a symposium on roadside advertising. This is still a very hot topic, and quite timely for me as my paper has just been published in Transportation Research Part F.

The ever-ebullient Peter Hancock gave a philosophical perspective to open the conference, arguing that it is perhaps driving which forms the distraction from life, rather than life being a distraction from driving, and how the different roles we play in life can affect our role as ‘driver’. Coincidentally, these kinds of thoughts are reflected in a recent post by Tom Vanderbilt as well. I like the notion of driving being a distraction from life – it accords with what a lot of people argue about life being too busy and everyone being time-poor these days (which brings us full circle with the ‘need’ for the car to be a mobile office). However, I’m not sure where it gets us in terms of solving the problem – however you view driving, it’s still a safety-critical task, and our job is to make it as safe as possible.

Other interesting themes emerged from the conference; as you might expect a number of papers looked at the effects of in-vehicle technology – both positive and negative – while there was also a reasonable amount of research on older drivers. Perhaps disappointingly, given the great efforts of the organisers to include inattention in the conference title, most of what I saw focused on distraction rather than its cognitive cousin. 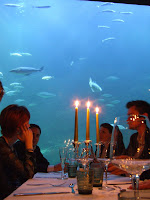 Overall they packed an awful lot into two days that it felt like a longer conference (in a good way!) – including a great social dinner at the Universeum science centre, which was duly sold to us as having a traffic safety exhibition … and sharks.
Posted by Mark Young at 21:05 No comments: