It’s been another busy week, with a couple of interesting days providing great opportunities to wave the flag for human-centred design and ergonomics.

On Tuesday I gave a presentation at the Design Museum to other university lecturers in design, as part of the museum’s ‘Design Factory’ student initiative. I won’t steal the museum’s thunder by saying too much about that here; it’ll appear on the museum’s website in due course. But suffice to say the museum has given us the fantastic opportunity to get involved with this initiative and linking it in with the ergonomics exhibition we’re showcasing there later in the year. 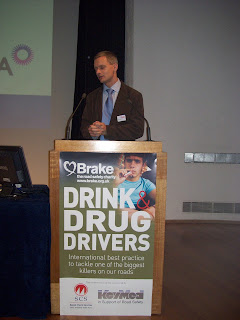 The next day I was invited to give a talk at a conference on drink and drug driving, organised by the road safety charity Brake. They’d picked up on my recent experiment on driving when hungover, which I conducted for RSA, the UK’s largest commercial insurer. I’m quite conscious of the fact that the study hasn’t been published in a peer-reviewed journal as yet, so I prefaced the talk with caveats about it being a pilot study – but it seems there isn’t much else in this area as yet, so Brake welcomed my data as a starting point for discussion. And if nothing else, it suggests more work is needed in this area.

The rest of the conference was really interesting too, with a number of presentations on campaigns such as the Think! campaign, ‘Talk to Frank’, and an innovative campaign in Scotland exploiting social media such as Facebook and MSN. Clearly there’s a lot of potential in this area, and whilst I’m trying to tap into some of it with this blog, I’m keen to learn more about harnessing it in my research and public engagement activities – so hopefully the blog will get slicker as time goes on!
Posted by Mark Young at 12:49